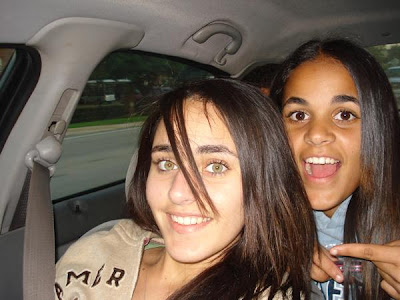 "Sisters, Amina, 18, and Sarah, 17, were each shot to death. Friends of the girls say their father was Egyptian and critical of popular American lifestyles. "I'm definitely 100% sure that it was her dad that killed her," said Kathleen Wong, a friend of the dead teenagers.

Wong says the girl's father was verbally abusive and that Sarah, especially, lived in fear. "She's always told me that she was always so scared of her dad," says Wong. "Even at school if a teacher joked around like, 'I'm gonna tell your parents about this', she would like totally flip out and start crying like, 'please don't tell'." (Emphasis added)"
Posted by Eyes at 11:11 AM

And just like in Canada, "domestic violence" will be blamed instead of Islam.

Yep. That's what they're saying...

It's pretty obvious to a trained eye that the murders of the Said sisters were dishonor killings.

ERS - yep, however I'm using their terminology, not mine. In Texas it's just plain old 'murder' with a fast track to death row.

Yepper... death row is what it's going to be and it is well deserved!

Anyone who believes there is honor in killing their own children and actually does it richly deserves the death penalty. In Texas there is little doubt that he'll get it!

Gayle, great to see you again! I got a new computer, and lost all my blogger addresses. So now I've found you!

Qur'an 4:15 "If any of your women are guilty of lewdness, take the evidence of four witnesses from amongst you against them; if they testify, confine them to houses until death [by starvation] claims them."

Qur'an 24:6 "And for those who launch a charge against their wives, accusing them, but have no witnesses or evidence, except themselves; let the testimony of one of them be four testimonies, (swearing four times) by Allah that he is the one speaking the truth."

there's a documentary on wednesday night about the "honor" killings of women on bbc1.

Wow, thanks alot EK! I also found a pretty good video by Walid Shoebat at YouTube:>D