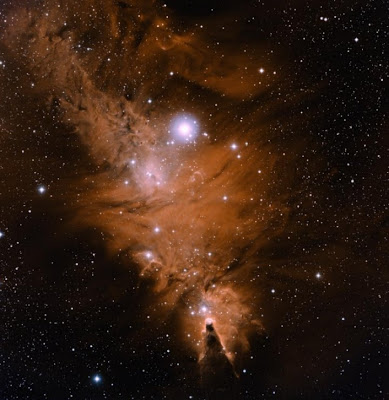 My sister-in-law died today. She was diagnosed with colon cancer, but it spread into her liver, bones and finally her brain. Thankfully, she died in her sleep. I love this scripture:

Revelation 21:4 "He will wipe every tear from their eyes. There will be no more death or mourning or crying or pain, for the old order of things has passed away."

She had a lot of moxie and will be remembered fondly. Now she knows all the answers to the BIG questions in life...
Posted by Eyes at 10:21 AM 14 comments:

First Image of the Earth from the Moon 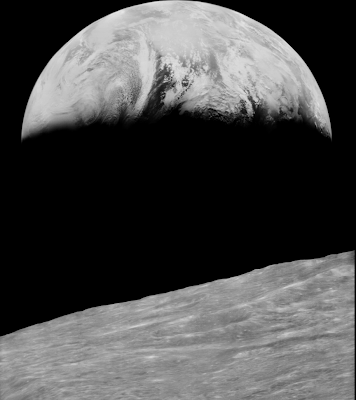 Credit: NASA/LOIRP
Explanation: Pictured above is the first image ever taken of the Earth from the Moon. The image was taken in 1966 by Lunar Orbiter 1 and heralded by then-journalists as the Image of the Century. It was taken about two years before the Apollo 8 crew snapped its more famous color cousin. Recently, modern technology has allowed the recovery of higher resolution images from old data sources such as Lunar Orbiter tapes than ever before. Specifically, the above image recovery was led by Nancy Evans as part of the Lunar Orbiter Image Recovery Project. Images like that above carry more than aesthetic value -- comparison to recent high definition images of the Moon enables investigations into how the Moon has been changing.
Posted by Eyes at 10:03 AM 4 comments:

A Bubble in Cygnus 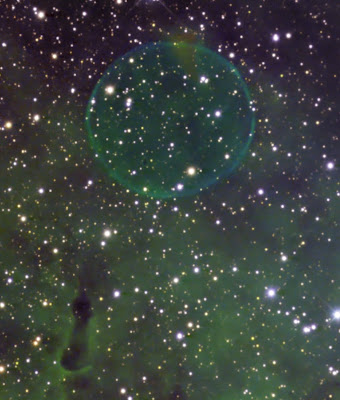 Image Credit & Copyright: Keith Quattrocchi, Mel Helm
Explanation: Adrift in the rich star fields of the constellation Cygnus, this lovely, symmetric bubble nebula was only recently recognized and may not yet appear in astronomical catalogs. In fact, amateur astronomer Dave Jurasevich identified it as a nebula on July 6 in his images of the complex Cygnus region that included the Crescent Nebula (NGC 6888). He subsequently notified the International Astronomical Union. Only eleven days later the same object was independently identified by Mel Helm at Sierra Remote Observatories, imaged by Keith Quattrocchi and Helm, and also submitted to the IAU as a potentially unknown nebula. Their final composite image is seen here, including narrow-band image data that highlights the nebula's delicate outlines. What is the newly recognized bubble nebula? Like the Crescent Nebula itself, this cosmic bubble could be blown by winds from a massive Wolf-Rayet star, or it could be a spherically-shaped planetary nebula, a final phase in the life of a sun-like star.
Posted by Eyes at 10:07 AM 65 comments: 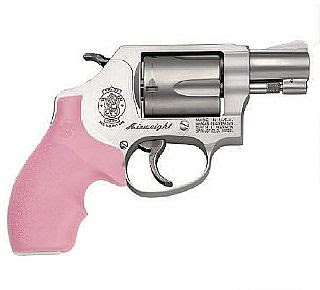 How cute is this version of the Lady Smith? Mine is boring black with a wood grip... I think this one is too cute!
Posted by Eyes at 1:06 PM 10 comments:

The election is over... 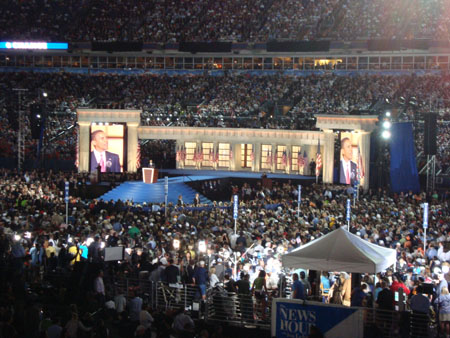 I predict the left is going to be very disappointed with Obama's performance. For example, if he keeps his promise to "bankrupt" the coal industry, the higher heating costs will push us further into recession.

There are some good things that came of the election:

1. The Democrats have no excuses now. They have the Presidency and both houses. The ball is entirely in their court. The only thing I would fight them for would be Supreme Court judges.

2. California said "NO" to gay marriage, and the gays are not so gay today! They are marching in the streets in protest.

3. We have proved racism is dead in America, although it looks like sexism is still alive and well (Hillary, and Palin were both treated extrememly unfairly).

4. Republicans can now get their party back on track with conservative ideas.