Credit: Don Pettit, ISS Expedition 6, NASA
Explanation: From the ground, spectacular auroras seem to dance high above. But the International Space Station (ISS) orbits at nearly the same height as many auroras, sometimes passing over them, and sometimes right through them. Still, the auroral electron and proton streams pose no direct danger to the ISS. In 2003, ISS Science Officer Don Pettit captured the green aurora, pictured above in a digitally sharpened image. From orbit, Pettit reported that changing auroras appeared to crawl around like giant green amoebas. Over 300 kilometers below, the Manicouagan Impact Crater can be seen in northern Canada, planet Earth.
Posted by Eyes at 12:00 PM 2 comments: 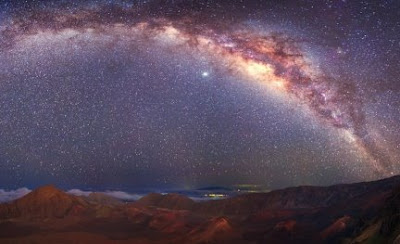 The Milky Way Over Mauna Kea
Credit & Copyright: Wally Pacholka (TWAN)
Explanation: Have you ever seen the band of our Milky Way Galaxy? In a clear sky from a dark location at the right time, a faint band of light becomes visible across the sky. Soon after your eyes become dark adapted, you might spot the band for the first time. It may then become obvious. Then spectacular. One reason for a growing astonishment might be the realization that this fuzzy swath contains billions of stars and is the disk of our very own spiral galaxy. Since we are inside this disk, the band appears to encircle the Earth. Visible in the above image, high above in the night sky, the band of the Milky Way Galaxy arcs. The bright spot just below the band is the planet Jupiter. In the foreground lies the moonlit caldera of the volcano Haleakala, located on the island of Maui in Hawaii, USA. A close look near the horizon will reveal light clouds and the dark but enormous Mauna Kea volcano on the Big Island of Hawaii. If you have never seen the Milky Way band or recognized the planet Jupiter, this year may be your chance. Because 2009 is the International Year of Astronomy, an opportunity to look through a window that peers deep into the universe may be coming to a location near you.
Posted by Eyes at 8:49 AM 3 comments: