To the Edge of the Sky 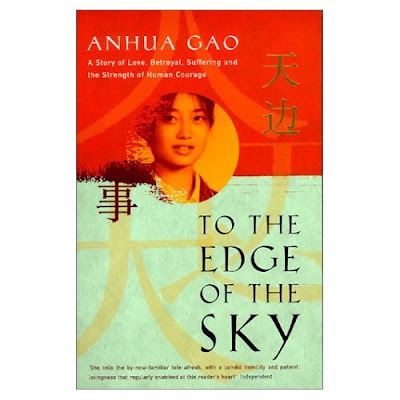 This is an excellent inside view of Mao's China, and the "Cultural Revolution", written by a woman who grew up in China and finally escaped. I can't remember who recommended it, but it's very good.

In 1972 Mao initiated yet another one of his paranoid purges of individuals he thought were enemies of China (notice the left is always highly paranoid?). Anyhow, books were banned, except those by Mao, Marx, Lenin and Engels. One day the author ran into a "Stinking Old Number Nine", which was the name used for an intellectual "enemy of the state", who was interpreting a English trade journal. They became friends, and he shared some classic English novels with her. One was "A Tale of Two Cities". She had to return it in 2 weeks, but loved it so much, she COPIED the entire thing into note books!!! Now that's something to think about the next time I go to a Barnes and Noble!

Here's a good quote from her book: "My new friend allowed me to borrow that one, 'The Gadfly' by Voynech, 'The Quadroon' by Thackeray and a small dictionary. He told me I must return 'A Tale of Two Cities' within two weeks because it wasn't his. The other books I could keep longer. It was then that I realized Mao was right: there was indeed a secret society! However, the aim of this society was not the destruction of Communism but the improvement of the mind. Looking back, perhaps it came to the same thing."

.... "By 1975 China was one huge torture chamber with thousands dying every week. In fact, we became so used to it that news of the death of someone we knew, perhaps even liked, caused little or no comment. There was nothing we could do to stop what was going on."

According to "Mao: The Unknown Story", "Mao Ze-Dong, who for decades held absolute power over the lives of one-quarter of the world's population, was responsible for well over 70 million deaths in peacetime, more than any other twentieth century leader."

In the meantime, I'm sure the idiotarian Hanoi Jane was yapping away about the glories of Mao's China.
Posted by Eyes at 10:09 AM

It amazes me that being so far into debt to China, we are willing to turn a blind eye to this horrid, totalitarian gov't.

ironic, isn't it? To be reading and reliving a "Tale of Two Cities" in Mao's China and experiencing the very excesses of popular revolution described in a 'corrupt' foreign civilization over 200 years previously.

Hi Fj, Yes, I suppose she identified with it. It's amazing to think of her copying the whole book by hand!

What book would I be? An OLD one. Probably Plutarch's "Lives".