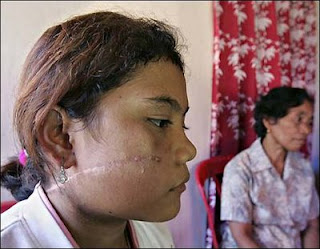 Hat tip: The Religion of Peace:

It's all about Iraq, isn't it?

Yep, it's all about Iraq and...India and the Sudan and Algeria and Afghanistan and New York and Pakistan and Israel and Russia and Chechnya and the Philippines and Indonesia and Nigeria and England and Thailand and Spain and Egypt and Bangladesh and Saudi Arabia and Ingushetia and Dagestan and Turkey and Kabardino-Balkaria and Morocco and Yemen and Lebanon and France and Uzbekistan and Gaza and Tunisia and Kosovo and Bosnia and Mauritania and Kenya and Eritrea and Syria and Somalia and California and Argentina and Kuwait and Virginia and Ethiopia and Iran and Jordan and United Arab Emirates and Louisiana and Texas and Tanzania and Germany and Australia and Pennsylvania and Belgium and Denmark and East Timor and Qatar and Maryland and Tajikistan and the Netherlands and Scotland and Chad and Canada and China and

......and pretty much wherever Muslims believe their religion tells them to:

"Fight those who do not believe in Allah, ... nor follow the religion of truth... until they pay the tax in acknowledgment of superiority and they are in a state of subjection." Qur'an, Sura 9:29
Posted by Eyes at 2:22 PM

And still, some will regurgitate the old bs that terrorism is largely a middle east phenomenon. It will take someone attacking their own house, rousing them from bed, and pushing a black rifle into their chest for them to wake up -- and that is only if they don't write that off as a bad dream.

Most of that comes from the MSM which perpetrates the lie.
Anyone who tells the truth is labeled a bigot and a Islamophobe.

You know, we are rapidly coming to the place where Truth will be deliberately rejected by the majority of people. As in Jerusalem, before the Babylonians destroyed it; the false prophets ran about calling, "Peace and safety!" and those who spoke the Truth were ignored, stoned, cast into wells or prison. People are going to be weary of warnings and desire "peace" AT ANY COST! They will turn their backs on and eventually turn on those who proclaim the Truth.
Now we are being slandered and marginalized...
Good morning, G*D bless and Maranatha!

You know what was really shocking about this post? I was going to include the list of individuals, and what happened to them, but it was TOO LONG!!! Now that's a sad statement.

It's worldwide jihad. The deniers will not be able to change that fact.