Solar Eclipse from the Moon

View of the Moon from the Earth 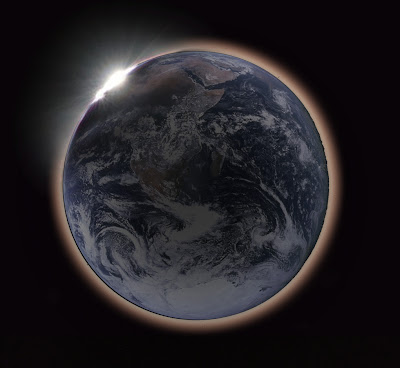 View of the Earth from the Moon

Illustration Credit & Copyright: Hana Gartstein
Explanation: Parts of Saturday's (March 3) lunar eclipse will be widely visible. For example, skywatchers in Europe, Africa, and western Asia will be able to see the entire spectacle of the Moon gliding through Earth's shadow, but in eastern North America the Moon will rise already in its total eclipse phase. Of course if you traveled to the Moon's near side, you could see the same event as a solar eclipse, with the disk of our fair planet Earth completely blocking out the Sun. For a moon-based observer's view, graphic artist Hana Gartstein (Haifa, Israel) offers this composite illustration. In the cropped version of her picture, an Apollo 17 image of Earth is surrounded with a red-tinted haze as sunlight streams through the planet's dusty atmosphere. Earth's night side remains faintly visible, still illuminated by the dark, reddened Moon, but the disk of the Earth would appear almost four times the size of the Sun's disk, so the faint corona surrounding the Sun would be largely obscured. At the upper left, the Sun itself is just emerging from behind the Earth's limb.

Nasa Article
Posted by Eyes at 8:31 AM

That is one fascinating picture. Kinda makes me wonder how much atmosphere we lose every day to the solar wind.

Awwwww, look at that cute avatar!!! Have you been adopted by TMW?

I hope the weather cooperates. As it stands now, it looks like cloud cover will prevent us from getting a good view :-(

You can tell??? It must be my svelte figure.

Hi Cube, It should be interesting!

Hi FJ, Yes, you have a cute little shape:>D

I really do like the avatar, FJ picked. If I could just grab it I could e-mail it to my daughter, she looooooves pandas. Yes, FJ, she awwwwwwwwed over yours!

Hey TMW, Just click on FJ, then when his profile comes up, click on the bear. It should upload into your photo software, then save. It's soooooooo ccccuuuuuuttte!

Got it! My daughter will be sending to her girlfriends and they will get all girly all over it! FJ-You may have a fan club...

tonight also begins the jewish holiday of purim (book of esther) and it's awesome these two events coincide, no?

p.s. madze has a purim post up - he's a great storyteller.

Uh oh. I'd better turn Ling-Ling's little brother over to their care. He'll just eat all the bamboo if I keep him here with me. Tell your daughter and her friends to take good care of him. He's theirs, now.

Tell them he can come visit again once all my bamboo grows back.

...and nanc, I like beamishes take on the meaning of these events. ;-)

yup - as do i - beamish also sees much from a biblical perspective - he's a smart girl scout cookie! i'm buying my annual 12 boxes once i tackle a girl scout...

HEY! What's going on here? I walk away from the computer for 12 hours and ya'all are yacking away about pandas, purim, and girl scout cookies! I'll head over and read:>D

Can you guess who I adopted this new avatar from?

I found him under beak's car.

LOL! I think this comment thread got just a tad off topic but it's a riot. :)

I love the pics. The second one has been snagged. Thanks!

FJ, I saw a cat and dog talk peace on the Dog Whisperer today.. It was really awesome!

I haven't seen that many episodes, but Cesar Millan is pretty awesome. Especially with the really mean dogs.

Now, if only only dominating Lefties were as easy as dominating animals...

I wonder if this will work.

My puppy and my daughter's kitty are bonded. If we tried to seperate them, they would fall apart. So if my daughter moves out soon, the cat stays, or the dog goes, probably they'll stay. Puppy-wuppy can't leave his mommy. OY! I'm an animal magnet!
Good morning, G*D bless and Maranatha!

tmw
BTW-We were totally socked in, no eclipse for us!

FJ, :>D Now that sounds like a project! Remember 'Calm Assertive' is the way to lead...

tmw, How cute! I had a German Shepherd who got along with a Siamese Cat once. He was a gentle giant (the GS)...

Awwww....!!! very nice collage that 'Sun Eclipse from the Moon'...
I hope this next to be viewed on February 20-21 can be totally enjoyed, without clouds obstructing the wonder of our skies ;(