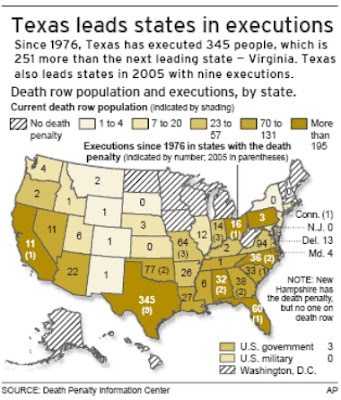 I have a feeling child molestation is about to take a nose-dive in Texas:

"AUSTIN (AP) - Hardcore child molesters could face the death penalty in Texas under a bill given preliminary approval by the state House of Representatives. The bill is designed to crack down on sex offenders who repeatedly prey on children. The House voted Monday to create a new category of crime - continual sexual abuse of a young child or children. It carries a minimum of 25 years to life in prison and possibly the death penalty for a second offense. The bill represented a compromise after the House delayed voting on a broader death penalty provision. They had constitutional concerns and worries it might lead some molesters to kill their victims. The bill is named Jessica's Law after Jessica Lunsford --- a Florida girl who was abducted and killed. The Texas version would make the Lone Star State the sixth to allow some child sex offenders to be sentenced to death."
Posted by Eyes at 4:31 PM

What they say is true, ya "Don't mess with Texas!" Wa-Hoo!

Yep! I was surprised to read that there are 6 other states that allow the death penalty for sex offenders...

Let's hear it for the Lone Star State!

I have a real problem with the Death Penalty...

as ron white would say, "in texas we have the express lane death penalty!"

texas has it going on!

Go Texas! I've LONG said that ALL rapists should be executed as well as murderers.

Worries that the new law might lead molesters to kill their victims? B.S.! If they're going to do it, they'd do it anyway. At least now we get to put the molestors down like the rabid animals that they are.

If more states did this the statistics showing Child Molesters moving to those states who DIDN'T might be surprising,

Nanc, So far we're holding the liberals at bay...

Brooke, Sounds good to me! Ya, I don't get that logic. Murders also get the death penalty, so why would that help?

K, Good point! I know the stats show that counties with concealed weapons permits have lower crime rates than those without. All the criminals go where the pickins are easy.

The graph of the executions by state is incomplete without also showing the violent crime rates by state. I touched on this in "Perfectionist Justice" -- the death penalty must be used frequently and speedily for it to have the power to effectively ward off potential criminals. Otherwise, it is no different than the parent who forever threatens severe punishment but gives out watered-down restrictions or does nothing at all.

Hi RS, Yes, I remember that post:>D You know, I don't even care so much whether it works as a deterent... I would be happy with plain old justice.