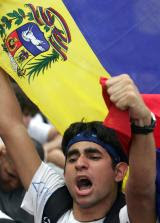 I think its fascinating watching a country chose socialism, and then self-destruct under the yoke of the inevitable dictator. It's hard to believe that in the 21st Century, people would actually chose this form of national suicide after it's been demonstrated over and over and over and over to be such a failed political system. The government will never do things as well as people in a competitive environment. I guess people never really grow up, and think ‘good government’ is like a big daddy who will take care of them.

Did you hear the wife of TB David say 'I just think it's horrible that the government didn't stop us from taking that flight.' How about a little personal responsibility?
Posted by Eyes at 9:39 AM

accountability went out the window sometime in the sixties...from what i remember - dayam!

Personal responsiblity eh? Whazzat? To many people it's an oxymoron, Eyes. And you're right... those who want Government to take care of them are definitely like children who still want their daddy to be responsible for everything. They have a hard time making decisions on their own.

After the wall fell, many Russians migrated to America. After being here a short while a lot of them went home. Those who were interviewed said they couldn't stand having to be responsible for everything! The lion who grows up in a cage when set free will usually return to it's cage, because it's all he's ever known.

Great analogy Gayle! I like that. We're lions who either choose freedom or cages...

If Shrillary gets elected, we will see the same thing, with front row seats!

I hope not.... American lions will not go silently into the night...

Hello Eyes!
I have not been to your blog in ages. It seems I have a lot of reading to catch up with. I was reading your other post about the book "Infiltration" and I wished I could get that book to read as well.
I guess I have told you that I have never been to the US, unfortunately, but I admire it beyond words. It hurts me a lot to see "something" like CAIR growing stronger and using the freedom they enjoy in the US for their dirty purposes!
Really good to be back to your blog))Lucky me - I'm still alive as you see, although I still have the same old "long tongue", as we say in Arabic for people who speak out their opinions:)

Hi Fed-Up!!! Good to see you're still floating around the blogasphere:>D You're right, CAIR is very pathetic. I wish someone would sue them and make them 'go away' like they did to the KKK, and all those other racist groups.