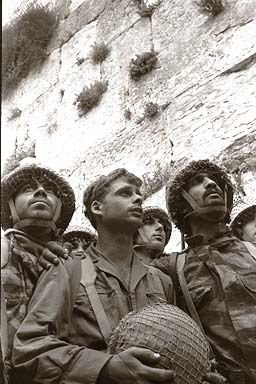 "On 7 June heavy fighting ensued. Gur's paratroopers entered the Old City of Jerusalem via the Lion's Gate, and captured the Western Wall and the Temple Mount. The Jerusalem brigade then reinforced them, and continued to the south, capturing Judea, Gush Etzion and Hebron. The Harel brigade proceeded eastward, descending to the Jordan River. In the West Bank, one of Peled's brigades seized Nablus; then it joined one of Central Command's armored brigades to fight the Jordanian forces which held the advantage of superior equipment and were equal in numbers to the Israelis." ~ Wikipedia

That guy in the center is cute!

When are the sons of allah going to leave this tiny country alone? Good grief, they are a mere 6 million people amongst 200 million SOAs....
Posted by Eyes at 7:27 AM

"When are the sons of allah going to leave this tiny country alone?" Sorry to say it, but the answer is "never", eyes. They are dedicated to the destruction of Israel and won't cease and desist until they are successful or wiped out!

Nope, they will never be satisfied as long as a single jooish person lives.

when Yeshua comes and they recognized Him as the One Who was pierced for the transgressions of all. isaiah 53