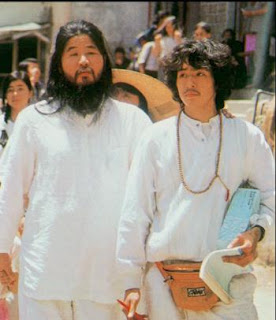 I have a friend who gave me a speech written by the head of the Soka Gakkai International organization, Mr Ikeda, and delivered at Harvard September 23rd, 1994. When I read it, and found this:

"While the authority of Marx as social prophet has been largely undermined by the collapse of socialism in eastern Europe and the former Soviet Union, there is an important truth contained in his equating religion to opium. And although one hopes that the recent tragedy in Waco, Texas, represents a rare extremity, it is not clear that all religions have rid themselves of their opiate-like aspects. In fact there is reason for concern that more than a few of the religions finding new life in the twilight of this century are characterized by a dogmatism and insularity that run counter to the accelerating trend toward interdependence and cross-cultural interaction."

I was totally insulted that he (supposedly so wise) would take a total sociopath like David Koresh as an example of Christianity. I was writing notes along the side of the article, and wrote "That is so unfair to blame the religion for a sociopath's behavior. There are nuts everywhere.. Remember the subway poison in Tokyo?"

Then I looked up that nutcase in Tokyo who killed all those people with Sarin gas, and guess what? He was a Buddhist. He thought - just like David Koresh - he was God's special messenger. The Tokyo subway incident happened exactly 6 months after the so-called enlightened leader of Soka Gakkai made his snide comment to Harvard. I wonder what he thought of that?

Dear Mr Ikeda, Does the Tokyo subway incident "represent a rare extremity"? Has Buddhism rid itself of it's "opiate-like aspects"? In fact, is there reason for concern that Buddhism is "characterized by a dogmatism and insularity" that runs counter to the accelerating trend toward interdependence and cross-cultural interaction? Hmmmm...

I wonder what he had to say after 3/20/95 when Tokyo got their little wake-up call to religious nutjobs!
Posted by Eyes at 3:52 PM

Marxism is an opium... for intellectual vanguards. Vulgar Marxism is more for the masses...

There is no end to the BS in the world at large & certainly no shortage of morons to fall for it.

Crazy people will be crazy. Religion is just one of the outlets they may find for their insanity.

It draws the nutjobs out of the wood work... not least was crazy mo.

You can hear in his words a very smarmy back-patting marathon coupled with two tons of arrogance. Academics always believe that they are better than anyone else in the world, when in fact, they are the parasites of society, unable to exist save in their insular petri dishes that we common folk call "universities".