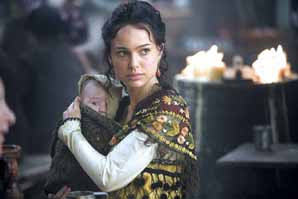 This sounds like a good movie! And, explains why I'm a conservative... SMALL GOVERNMENT:>D


The parents who raised Oscar-winning director Milos Forman were Protestants, but both perished in Nazi concentration camps. The director's adoptive father distributed "forbidden" books to his students during the Nazi occupation and was sent to a concentration camp. Amazingly, he was returned to Prague to stand trial and was even acquitted, but nevertheless he was shipped to Buchenwald where he perished in 1944.

A year earlier, Forman's mother, Anna, suffered the same fate: After being arrested, she was sent to Auschwitz and died there.

"Nobody knows why," Forman told JTA, speaking from his Connecticut home. "It was like the Inquisition. They grabbed people and nobody knew why."

The analogy is deliberate, an intentional link to his latest film, Goya's Ghosts. It's a multi-layered story, a beautifully photographed art tour and a history lesson with multiple helpings of an impressive Natalie Portman.

The year is 1792, and while most of Europe has thrown off the shackles of the Roman Catholic Church's Holy Inquisition, it still wields its power in Spain.

Caught in its toils is Ines, played by Portman, the daughter of a wealthy Christian businessman whose lovely face has made her a favorite model of the great court painter Francisco Goya.

Ines runs afoul of zealous Church spies, who finger her as a "Judaizer," a forced convert to Christianity who "relapses" into observing Jewish rituals when she declines a plate of pork at a public inn. Her nemesis, torturer and eventual seducer is chief inquisitor Brother Lorenzo, impressively portrayed by Spanish actor Javier Bardem. Ultimately the inquisitor is disgraced, but not before fathering Ines' daughter.

When Napoleon conquers Spain in 1808, the Inquisition is abolished, the prison doors are thrown open and Ines emerges as a half-deranged hag. She undertakes a desperate search for her illegitimate daughter, who has become the beautiful prostitute Alicia, also portrayed by Portman in a remarkable double, or rather triple, performance.

The recently released film is the latest for Forman, a Czech native whose biological father was Jewish, in a directing career that also includes One Flew Over the Cuckoo's Nest, Amadeus, Ragtime and, most recently, The People vs. Larry Flynt in 1996.

Forman doubts this struggle will ever end.

"After each war, after each mass killing, we all scream 'Never again,'" he said. "Then we do it again because we never learn from history." (JTA)
Posted by Eyes at 5:15 AM

Is this movie out yet? I've definitely got to see it.

Hi Brooke, It's in theaters now, but very limited release. ONly 49 theaters nationwide. Isn't that just the way it is? Crazy...

Thanks for the write up on this movie. I'm always looking for good movies. I don't go to the theater though, but I'll put it in Netflix and wait until it goes to DVD to watch it. Thanks again!

I think you have chosen the right way. I'm so sick of HBO, etc. They rarely have anything new or interesting...

Perhaps we can no longer learn from history because history keeps getting adapted to suit the prides and prejudices of the viewing audience.

FJ-Or more likely, rewritten to fit neatly into the views and prejudices of the writers/directors/producers. It's all to "educate" us into their particular view.

One of the favorite pastimes of the hubby and I is to read the history of whatever movie we're about to watch, and then pick apart the inaccuracies in the movie.