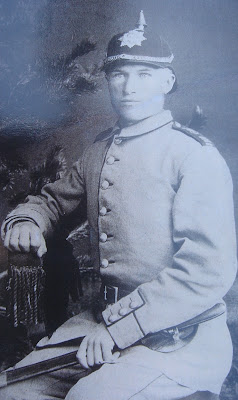 From my mom: ""I was thinking about my dad's dad yesterday & I remembered that both of his parents were dead by the time he was 6 yrs old, & he had to go & live with a neighbor who made him be a shepherd, at that young age, but he did get some schooling in the winter months, & he read the Bible in his own language & his Norweigen news paper, which he always got once a week, from Norway. I imagine it was old info, but he enjoyed it +++ & he smoked a pipe. He died at age 82 from starving really, but I think he had an ulcer & probably didn't feel much like eating. He was a kind old man a lot like R's dad. He was in the Norweigen Army, he is the one I gave you the picture of last year when you were here. He was in there for 6 yrs."
Posted by Eyes at 8:59 AM

Looked young, a hard life can polish the diamond,crush to powder or harden a heart.
He had his Bible and sounds like he was a diamond!
Good morning, G*D bless and Maranatha!

i truly appreciate old family stories - sometimes it's not ALL about where we're going, but where we came from.

it's good your mom gives you these gifts.

i wish i'd written down more old tales from my own family.

What a great way of saying it TMW. It's true. I've known all three. I just loved this story because trips down memory lane can really help us realize how fortunate we are in this time and place.

Your great-grandfather was a very handsome man. I love those old pictures, and it's great your mom shares these stories with you.

It is fantastic that these stories are passed on, so that we do not forget our past!

I love the stories and the pictures. I close my eyes and take a deep breath.

Feel the history buried deep in your blood.

I wish I had pieces such as those. What a wonderful treasure your mother has given you.

Hi David, Yes, times were tougher back then, but I bet they appreciated the few things they had.