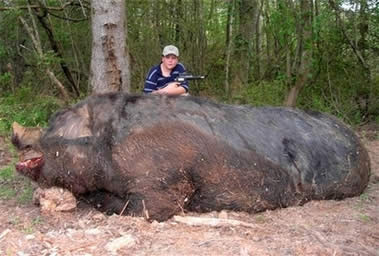 In this photo released by Melynne Stone, Jamison Stone, 11, poses with a wild pig he killed near Delta, Ala., May 3, 2007. Stone’s father says the hog weighed a staggering 1,051 pounds and measured 9-feet-4 from the tip of its snout to the base of its tail. If claims of the animal’s size are true, it would be larger than “Hogzilla,” the huge hog killed in Georgia in 2004. (AP Photo/Melynne Stone).

Just think of the barbecue!

That's a big pig! At first glance I thought it was Rosie O'Donnell.

They just showed it on FOX... The kid who shot it being interviewed.

Gayle-Rosie and Michael Moore's love child!
At least they are mounting the head!

LOL! Now THAT's an image I could have done without!!! HA HA HA!

Process and freeze that baby and he can feed the whole family for a loooooooong time!

I just heard they're making 800 lbs of sausage out of him. I like mine spicy.

and that's a lot of bacon

I heard last night from someone that it was a domestic pig sold to a hunting farm. I don't care enough to search for details... All I know for sure is I've never seen even a domestic pig that big!