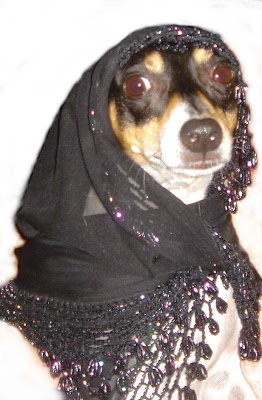 nope! doesn't like it! look at the look on poor av's face...

I was going to say that!

...but what is she gonna think when she has to wear one all the time?

Hi Marlon, I guess she'll just have to get used to it or... be stoned. Muslims... How could anyone do the things they do to their supposed 'loved ones'... I've had this conversation with actual muslims..

Me: "If you killed someone I loved, I might kill you, but there's no way I would ever kill your children.. Talk about cowardly."

yes, it is best to be stoned before they kill you!

Look at those eyes! She looks mortified!

Awwwwww. That poor baby! She truly does look mortified!

"Poor Amina Poocha. Showing too much of her stylish hair, she soon found herself in the hands of the Iranian Fashion Police."

this picture looks like nazi propaganda from ww2 about jewish people..

Cool AOW:>D She loves the publicity. She's thinking maybe she could be an actress... She does have the forlorn look of the oppressed.

U guys are gay. Bitch, ass hole, go to hell

You guys deserve to die and i am the one who sent u guys bitch, ass hole, go to hell. Also fuck u,ho, ugly bitches, and the world's biggest retards. I hope u know who u are. And the way u guys dress is the way animals dress. So u r an animal. Anyway the muslims never attacked u guys, your leaders attacked their own country and killed the people (who might have been just like u guys)just to get pity from people and blame the best religion's people. And again fuck u.

This blogger is just another one of those propagandists filled with hate. They're gone to the dogs.

YOUR ABSLOUTE RASCIST CLOSED MINDED AND SHOULD LEARN TO WORRY ABOUT YOURSELVES AND NOT OTHERS.MUSLIMS DONT TALK ABOUT OTHER PEOPLES RELIGON SO DONT TALK ABOUT MUSLIMS YOU ARE SERIOUS SCUMS THE ONLY DOGS AROUND HERE ARE YOU. THE ONES WHO HAVE NOTHING BETTER TO DO THAN BE RACIST TOWARDS OTHERS. AND YES MUSLIMS BELIEVE IN LOVE AND PEACE AND THE ONES WHO DONT FOLLOW THAT HVE JUST TAKEN THE NAME OF ISLAM WITH OUT ACTUALLY FOLLOWING PROPLY SO PLEASE BEFORE POSITING OR MAKING SILLY IMMATURE COMMENTS DO YOUR RESEARCH... SO IGNORANT .

stop being racist against muslims
and get a life

wow, you are so bigoted! you have much growing up to do. please go educate yourself before indulging in another blog post. shame on you.

muslims are not like that at all..discover islam well coz u are very ignorant and claiming things that arent true at all coz ur countries's media are just figuring islam in a bad image to serve thier purpoes as they know well that islam is very quick in spreading plz check this and then decide http://www.quran-m.com/firas/en1/