"How To Enjoy The Bible" ~ E.W. Bullinger 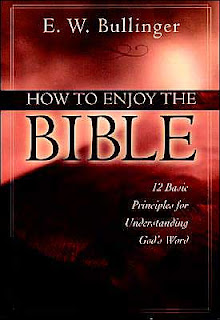 I’m reading “How To Enjoy The Bible” by Bullinger, written in 1907. It’s interesting because it was written BEFORE 1948, long before anyone would have ever guessed that Israel would be re-born. This is an excellent snipette against both “Replacement Theology” and “Universalism”:

What is this but not only wrongly dividing the Word of truth, but the introduction of error, by robbing Jerusalem of her promised ‘mercies’ and appropriating these stolen mercies to the Church? While the ‘judgments’ are left for Jerusalem, just as burglars take away what is portable, and leave behind what they do not want or cannot carry away.
We believe God when He says that the Visions shown to Isaiah were “CONCERNING Judah and Jerusalem” (Isa. i.1).

True, they were written FOR us; and ‘for our learning’ (Rom. xv.4); but they are not addressed TO us, or written CONCERNING us, but ‘concerning Judah and Jerusalem.’

It would be an act of dishonesty, therefore, for us thus to appropriate, by interpreting of ourselves, that which was spoken of Israel.

In like manner, if we take, as some do, the words of the Epistle to the Ephesians as though they were written to or concerning the Gentiles (or the unconverted world), then we not only rob the Church of its most precious heritage, but we teach the ‘universal Fatherhood of God’ instead of His Fatherhood of only those who are His children."

This is another funny little bit from the page before: “This comes of that inbred selfishness which pertains to human nature; which, doing with this as with all beside, is ever ready to appropriate that which belongs to others.”
Posted by Eyes at 1:17 PM

Well stated!
Enjoy the book, and The Book!

I think we've talked about this before, but doesn't it seem people of 100+ years ago spoke and wrote more intelligently? It must be because we rely on the TV so much these days. Did you see the post on The Beak Speaks today? There's some psycho who thinks it's okay for her 13 year old daughter have sex! She's a nudist... never wears clothes and won't let her kids wear clothes in the house. How low can we go?

Beaker thinks it's a man(~60) who is doing it to rile up the leftistas. I'm not sure, so I evaded the whole post!
But yet there are nitwits that do believe it, and we the normal and sane get to deal with the human wreakage left behind!

tmw
People 100+ yrs. ago had a better education and were taught virtues!

LOL!!! A 60 year old man! ROTFLMAO!!! That is too funny, but probably true... Probably some psycho film prof. At any rate, I think it's best not to encourage him. RS has a similar observation wrt literacy at his blog....

Universalism really riles me. If salvation is unnecessary (for all are saved in the end), then why does God instruct us to depart from sin? So that we won't be in pain a few years in the fire? Yet He speaks of it as to be avoided at all costs. Something doesn't jive here, and that's universalism.

Thanks for the mention, Eyes. :)

study to show yourself approved and be ready in season and out of season to provide a defense of your faith ....this is great stuff eyes.

Hi RS, Yep, Universalism makes no sense at all. For one thing, according to Jesus we are to 'love God and love our neighbors as ourselves'... Soooo, if you're a murdering thug (like saddam) then I don't think you fit the requirement....

EB, You hit the nail on the head! If we can't defend our faith, then we end up looking like idiots and a laughing stock. Of course we're human, so we're going to screw up at times, but we should at least try. This is a great book. Uncanny how he predicted Israel as a nation just by believing what was written....

He also believes in the 'rapture' although he (so far) hasn't defined it. I view the rapture as the lottery. If it's true, I win, if not, I'll struggle through...

... there are so many Christians dying TODAY for their faith...