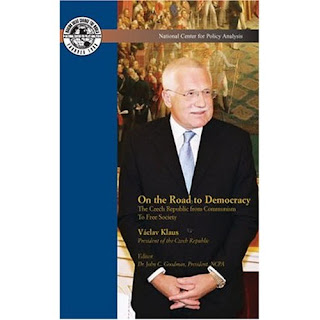 "Q: On Wednesday, the European Commission has approved carbon dioxide caps for new cars. One week earlier, the U.N. IPCC climate panel released a report that has described, once again, the global warming as one of the major threats for the whole civilization. The Stern report about similar threats was published before that. And you suddenly say that the global warming is a myth. Try to explain, how did you get this idea, Mr President?
.
A: It's not my idea. Global warming is a myth and every serious person and scientist says so. It is not fair to refer to the U.N. panel. IPCC is not a scientific institution: it's a political body, a sort of non-government organization of green flavor. It's neither a forum of neutral scientists nor a balanced group of scientists. These people are politicized scientists who arrive there with a one-sided opinion and a one-sided assignment. Also, it's an undignified slapstick that people don't wait for the full report in May 2007 but instead respond, in such a serious way, to the summary for policymakers where all the "but's" and "if's" are scratched, removed, and replaced by oversimplified theses.
This is clearly such an incredible failure of so many people, from journalists to politicians... If the European Commission is instantly going to buy such a trick, we have another very good reason to think that the countries themselves, not the Commission, should be deciding about similar issues.
.
Q: How do you explain that there is no other comparably senior statesman in Europe who would advocate this viewpoint? No one else has such strong opinions...
.
A: My opinions about this issue simply are strong. Other top-level politicians do not express their global warming doubts because a whip of political correctness strangles their voice."

i love this guy!

but, like i inquired of farmer - how long before he gets his plutonium cocktail?

I like truth-tellers! And this gentleman says it straight.

He is great isn't he? I heard that the guy who was killed in England was actually a muslim and was trying to procure polonium triggers for nuclear devices... He was very much involved in Chechnya... I think I read that at CUANAS a few days ago... They're now thinking the Russians aren't involved.

It's sad that such an issue of vital importance has become political instead of scientific.

Yes it is... All those minds could be doing something productive instead of wasting time.