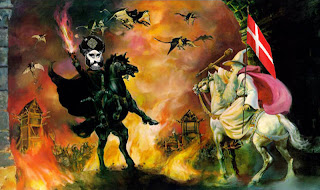 Now this is an interesting proposal, hat tip Pedestrian Infidel:

"Therefore: Islam is not a religion, but a political ideology more akin to Fascism and totally in opposition to the ideals of freedom as described in the United States Constitution, especially the Bill of Rights.

Be it resolved that the following Amendment to the Constitution be adopted:

The social/political/ideological system known around the world as Islam is not recognized in the United States as a religion.

The practice of Islam is therefore not protected under the 1st Amendment as to freedom of religion and speech.

Immediately upon passage of this Amendment all Mosques, schools and Muslim places of worship and religious training are to be closed, converted to other uses, or destroyed. Proceeds from sales of such properties may be distributed to congregations of said places but full disclosure of all proceeds shall be made to an appropriate agency as determined by Congress. No compensation is to be offered by Federal or State agencies for losses on such properties however Federal funding is to be available for the demolishing of said structures if other disposition cannot be made.

The preaching of Islam in Mosques, Schools, and other venues is prohibited. The subject of Islam may be taught in a post high school academic environment provided that instruction include discussion of Islam’s history of violence, conquest, and its ongoing war on democratic and other non-Islamic values.

The preaching or advocating of Islamic ideals of world domination, destruction of America and democratic institutions, jihad against Judaism, Christianity and other religions, and advocating the implementation of Sharia law shall in all cases be punishable by fines, imprisonment, deportation, and death as proscribed by Congress. Violent expressions of these and other Muslim goals, or the material support of those both in the United States and around the world who seek to advance these Islamic goals shall be punishable by death.

Muslims will be denied the opportunity to immigrate to the United States.

Nothing in this amendment shall be construed as authorizing the discrimination against, of violence upon, nor repudiation of the individual rights of those Americans professing to be Muslim. The individual right of conscience is sacrosanct and the practice of Islam within the privacy of home and self is strictly protected to the extent that such individuals do not violate the prohibitions described in Article III."

Read entire article here: PI
Posted by Eyes at 9:08 AM

Unfortunately, such a solution would fly in the face of the spirit of our constitution.

Not saying it wouldn't come to that...

Hi Brooke... unless the constitution is ammended which is what it is saying:>)

Should have come to that point a week after 9/11, when no mohammadin stood up and condemned the outrage without any caveats!

Amen tmw... It is always such a disgusting thing to see people blaming the victim, in any circumstance. It's okay to analyze why the victim didn't take steps to protect themselves, but to blame them is an outrage.

:>) Well at least 'new blogger' lets you do that. I go crazy at sites with 'old blogger' when I type a long message and then realize I have to go 'out' and sign in. Of course 'copy' works fine, but it's several extra steps,...

The definition of a cult perfectly describes Islam. I agree with this post completely.

I wonder what the criteria is for tax exempt status....