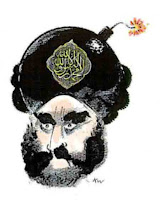 "The 18-year-old gunman who killed five people in a crowded Utah shopping mall was a Bosnian Muslim refugee who was prepared to kill many more, say investigators.

An off-duty police officer having an early Valentine's Day dinner with his wife was credited today with cornering Sulejmen Talovic, exchanging fire with him until other officers arrived to shoot and kill the gunman.

The trench-coated teenager wanted to "to kill a large number of people" and probably would have killed many more if not for the off-duty officer, Police Chief Chris Burbank said." Read more...
Posted by Eyes at 8:49 AM

But it does not surprise me. DId he shout "Allahu Akbar" while he was committing mass murder?

It's a wonder these incidents don't happen more often given these
embittered, hateful people.

I wonder.... We were at a restaurant one night and there were a bunch of muslims there celebrating someone's graduation. One of them said a prayer and then they all yelled "Allah Akbar! Allah Akbar! Allah Akbar!" It made shivers run up and down my spine. I heard from the owner that they got into some trouble after that demonstration.... from her (the owner.. who is Coptic).

i read about this at madzionist this morning - he also has a list of other izzie attacks such as this within our borders that have gone all but unnoticed by the maelstrom media.

when are people going to get it?

if i were ever in a public place and heard even one single "allahu akhbar" - i would quite possibly go nutz on the person and later as a defense say i had turette's, pms or something of the sort...

Hi Nanc, It was pretty chilling. I don't know if they know how stupid they look. They were a bunch of African American converts... Funny they don't seem to realize how prejudiced muslims are.. Just look at Sudan/Darfur.

Now he being painted as a "victim" of a Christian massacre...

Eyes-He was the "6th" shooting victim, :cough, gag, spit:!
And that off duty officer is a hero, excuse me, HERO!
After all this time, there was NO EXCUSE EXCEPT MOHAMMADISM FOR HIS BEHAVIOR!
He made the choice to murder, so the burden of sin is squarely on his shoulders! The pc weasels can squirm and writhe in an excess of self-loathing, but the truth is, he was a murderer!
We lost my late 4 yrs. ago, my 18 yr. old son could go berserk and kill a bunch of people because he was "abandoned" by his Father, that would make him a victim in pc eyes. Oh, excuse me, he would only be a horrible murderer because he is a white Christian...not pc enough...
Good morning, G*D bless and Maranatha!

You are right on tmw! He wanted to kill as many people as he could. Period. Probably 'infidels' if you get right down to it... But THAT will never come out in the news.

I do think this incident should make everyone investigate their states concealed weapons laws. If you got 'em, get 'em. They were just lucky their was an armed 'off-duty' police officer there. But, if we all were armed:>D

There are a few female Muslim converts where I do diaper studies... Two are black converts, who wear the Chador, and one is white who wears normal clothing with a head scarf.

The black ones will not speak to anyone else, and even openly shun the white one.

I actually find myself feeling sorry for the latter!

Eyes, it would be hard not to freak when the Allahu Akbars started... Luckily, an explosion did not follow!

Yes Brooke, Luckily my dear friend who owns the place, from Ethiopia, told them point blank that such rants are not acceptable in her restaurant. Bravo!

Well, I AM shocked and surprised. Every time I hear about another incident, I think it's going to be Buddhist perpetrators....NOT!

Eyes: Yes it should make us reconsider concealed-carry laws. Decent, law-abiding citizens should be encouraged to carry concealed firearms, so they can stop this kind of stuff when it starts to happen. The government could even consider a special tax incentive for those who do!

Brooke: I'll tell you what the difference is: 1) Christianity is based on love. Some Christians get it wrong, and do terrible things in the name of their religion. We all goof up sometimes and to some extent. 2) Islam is based on hatred. Many Muslims goof it up, or don't understand, and turn out to be really decent folks. Too many get it right, and do the bidding of that evil spirit that so terrified their "holy prophet".

Hi YD, You got that right. I'm not the best Christian in the world, to my detriment. I know muslims who are not very good muslims, to all our benefit. It's pretty easy to figure out when people read the koran. It's not rocket science. Theologians have written about 'natural law' which is written on the hearts of all humans. The things advocated in the koran are done only by violoting the 'natural law' and they will eventually have to answer for their evil ways to the Creator of the Universe.

Sudden Jihad syndrome is when a single Muslim, or small group of Muslims, suddenly and with little or no warning go into Jihad mode. The victims are kaffirs attacked at random.

The main characteristics of SJS attacks are that:

- There is no central planning - they are totally spontaneous.

- The victims are unknown to the Jihadists.

- They are unreported or underreported in the MSM, with even the most horrendous cases seldom being reported beyond the local press.

- The MSM usually attempt to conceal the attackers' religion.

- If the the attackers are obviously Muslim then the MSM deny that this is of relevance.


Known SJS attacks to date (and given the attitude of the MSM there may be many more which are unknown) are listed below.

NOV 2003 Charlene Downes (March 25, 1989 - on or after November 1, 2003) was a teenager from Blackpool, Great Britain, who was murdered at age of 14. Charlene disappeared on November 1, 2003. She has never been seen since then and her body has not been found. In March 2006 two Muslims were charged with her murder. These two Muslims were owners of a takeaway restaurant, and a local newspaper reported that they cut up and disposed body of their victim in the food sold at the restaurant. Far right organisations in Britain criticised the mainstream media for suppressing the information about the murder because the two accused men are foreign born (from Jordan and Iran). - http://en.wikipedia.org/wiki/Charlene_Downes

MAR 2004 15 year old Kris Donald abducted at random by Muslims. He sustained internal injuries to three arteries, one of his lungs, his liver and a kidney, his eyes were gouged out and he was castrated, he was finally doused in petrol, set on fire and left to die. Despite the horrendous nature the case featured on national news only three times and was later largely confined to regional Scottish bulletins - http://en.wikipedia.org/wiki/Kriss_Donald

SEP 2004 A woman was killed and another was left fighting for her life after a knifeman went berserk in broad daylight in a Greater Manchester street. The woman killed was attacked first by the man, who was carrying what appeared to be a kitchen knife with a six-inch blade and had been seen reading from the Koran. The man was arrested but no further reports of any trial appeared in the MSM. - http://www.jihadwatch.org/archives/003071.php

MAR 2006, a twenty-two-year-old Iranian student named Mohammed Reza Taheri-azar drove an SUV onto the campus of the University of North Carolina at Chapel Hill, deliberately trying to kill people and succeeding in injuring nine. After the incident, he seemed singularly pleased with himself, smiling and waving to crowds after a court appearance on Monday, at which he explained that he was “thankful for the opportunity to spread the will of Allah.” - http://www.jihadwatch.org/archives/011397.php

JUL 2006, a Muslim named Naveed Afzal Haq forced his way into the Jewish Federation of Greater Seattle and then began shooting, killing one woman and injuring five more. - http://seattletimes.nwsource.com/html/localnews/2003159826_webbelltown28.html

AUG 2006 A Muslim from Afghanistan killed one person and injured fourteen during a murderous drive through San Francisco city streets during which he targeted people on crosswalks and sidewalks. He identified himself as a terrorist after his rampage - http://sfgate.com/cgi-bin/article.cgi?file=/c/a/2006/08/30/FREMONT.TMP

JAN 2007 Rampage behind the wheel leaves trail of destruction. A Muslim havoc in north Minneapolis, ramming into at least eight cars and injuring a business owner, police said. When asked by investigators why he went on the crime spree, the 22-year-old suspect said, "Allah made me do it," according to a source with knowledge of the case. - http://www.startribune.com/467/story/972154.html

FEB 2007 Muslim Sulejmen Talovic killed five people and wounded four before he himself was killed by an off-duty Ogden police officer who happened to be in the Salt Lake City mall. -http://www.frontpagemag.com/Articles/ReadArticle.asp?ID=26961