Because They Hate ~ Brigitte Gabriel 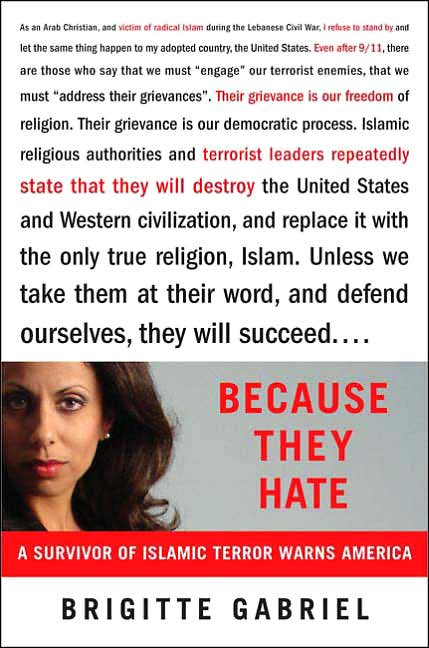 Here's a quote from "Because They Hate" by Bridgitte Gabriel, speaking about when her mother was cared for in an Israeli hospital during the Lebanese civil war:

"I also learned about hatred, intolerance, and bigotry. The Muslim woman who was in the room with my mother and had stayed in the hospital for about twelve days. And even after ten days, when the doctors left the room after changing her bandages and checking on her in their morning tour, she said, with an evil, hate-filled look on her face, "I hate you all. I wish you were all dead." And for the first time in my life I saw evil. I realized that this Muslim couldn't love the Jews even after they had saved her life. And when you are unable to be grateful to the people who saved your life, you have no soul. When humans become devoid of compassion, a sense of forgiveness, and open-mindedness, when they surrender their humanity to hate, they become an evil force of darkness that is irreconcilable with hope, love and peace."

and this bit about the media coverage of the war:

"Their bias was shocking. The media reported a one-sided story, focusing only on the Palestinians and Muslims whose lives had been destroyed by Israel. I thought, What about our lives, which had been destroyed by the Muslims and the PLO? What about the massacres, slaughter, rape and torture of Christians and the destruction of our churces by Muslims shouting "Allahu Akbar"? What about Lebanese democracy now under the thumb of the Syrians? What about the people of Lebanon, who were so open-minded, tolerant, and fair? What about the hatred, intolerance, and bigotry of the Palestinians who were given refuge in Lebanon, and then destroyed and terrorized what was once the beacon of culture, education and modernity in the Middle East?"

Hmmmmm, that sounds a lot like what happened last summer! Doesn't it?
Posted by Eyes at 5:43 PM

Why do they hate? Who is their father? Isn't he the father of lies? He hates, so they are faithful children and do what they see their father doing!
Good morning, G*D bless and Maranatha!

tma
The trick is to get them to the point where they are adopted as sons and daughters of G*D, that will change everything!

I feel so sorry for her mother being stuck in a room with a woman possessed of such irrational hatred. It would definitely not be conductive to helping her heal fast! That sort of irrational hatred effects every living thing around it. If there were any flowers in the room I'll bet they wilted much faster than they would have otherwise.

Blessings, Eyes. When I go into town next week I'm going to look for this book.

Because They Hate gave me nightmares. The only book on Islam which has done that to me!

I saw a video clip of Gabriel recounting the story on YouTube...As AOW says, it is nightmare stuff.

Hi Brooke, I saw it too. It was about an hour long... Or maybe that was on her website.