The Force of Reason ~ Oriana Fallaci 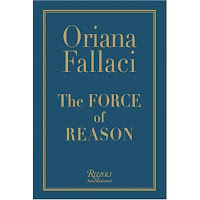 Another good book, and great quote where Oriana Fallaci argues that the Left is every bit as religious as Islam:

“Like Islam it considers itself sanctified by a god who is the custodian of the Truth. Like Islam it never acknowledges its faults and its errors, it considers itself infallible and never apologizes. Like Islam it demands a world at its own image, a society built on the verses of its prophet. Like Islam it enslaves its own followers. It intimidates them, it makes them feel stupid even when they are intelligent. Like Islam it does not accept different opinions and if you think differently it despises you. It denigrates you, it punishes you. Like Islam, in short, it is illiberal. Autocratic, totalitarian, even when it plays the game of democracy. Isn’t it revealing that 95% of the Western people converted to Islam come from the Left?”
Posted by Eyes at 4:26 PM

That comparison has been made many times, but that's the best example I've seen.

Ya, wish they were my words.. She is a great writer... I just bought "Inshallah" about the Lebanese 'civil war'.... 1992... I've got my fingers crossed that even back then she was a 'freedom thinker'.... and not a liberal nutcase.