The Truth About Muhammad - by Robert Spencer 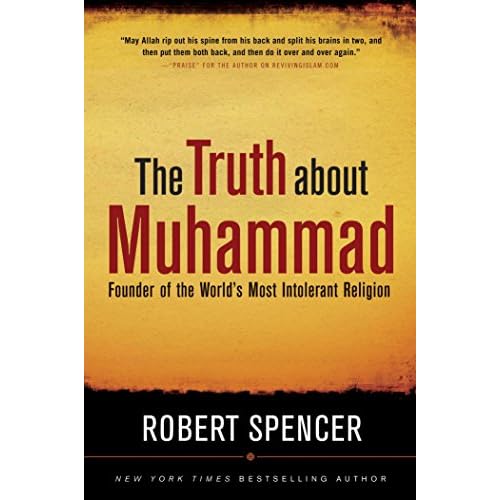 This in an excellent book! It puts the strange and violent verses of the koran into the cultural and historical context of Muhammad and his gang of thieves. You can see that he was a violent, egomaniac with messianic delusions, much like Jim Jones, David Koresh, or Warren Jeffs. It's a good book to have when and/if you read the koran, so you can see the background and results of various "revelations" from allah!

For example, M was frustrated that his own tribesmen wouldn't convert to his newly invented religion, so he met with them and came up with the brilliant idea that he would say allah told him it's okay to worship their gods and they would worship his.

Finally, "He received a revelation saying that it was legitimate for Muslims to pray to al-Lat al-Uzza, and Manat, the three goddesses favored by the pagan Quraysh, as intercessors before Allah." Ref: Ibn Ishaq, 165-166 (historian).

Convenient huh? He later changed his mind, when a friend told him it sounded like satan, not allah, had told him that. So these are the 'Satanic Verses' which in recent years earned Salman Rushdie a death fatwa.

The book also explores the reasons why muslims hate Jews so vehemently... They chose death rather conversion.
Posted by Eyes at 8:06 AM

Thanks for letting us know about this book, Eyes. I'll have to get a copy of it, even though I feel I already know the truth about Muhammad. I wish the libs would read it but we know they won't.

Hi Gayle, Yes, you're right, they won't, but then that's the hallmark of intelligence,,, looking at all the angles, and if they were, they would.

Of course, lefties imagine that all religions are just like Islam... violent and bloodthirsty. Their logic goes kinda like this...

Islam is violent. Islam is a religion. Ergo all religions are violent.

How can they tell that all religions are violent? Remember those Christian Crusades...

Even though the Crusades were a reaction to over 800 yrs. of mohammadin deprivations, robberies, insults, enslavements, rapes, destructions...
Good morning, G*D bless and Maranatha!

"Islam is violent. Islam is a religion. Ergo all religions are violent.:

Apples are red. Apples are fruit. Ergo all fruit are red...

Also, the crusades were 1000 years ago... Look at the difference between the left/muslims and the right -> The left/muslims are still whining about something that happened a THOUSAND years ago. Meanwhile everyone else moves on... (Japan/Germany)...

Heck I could care less about muslim violence if it was a thousand years ago. But it's not, and there's very little chance it will change as long as Mo is the 'human ideal' in behavior and the koran 'allahs exact words'..... nope, this is a very sticky wicket we're in...