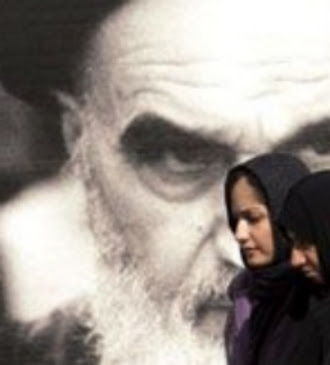 Is that a 'face only a mother could love"??? Here's some quotes from Khomeini:

“Islam makes it incumbent on all adult males, provided they are not disabled or incapacitated, to prepare themselves for the conquest of countries so that the writ of Islam is obeyed in every country in the world....But those who study Islamic Holy War will understand why Islam wants to conquer the whole world”?

“Those who know nothing of Islam pretend that Islam counsels against war. Those [who say this] are witless. Islam says: Kill all the unbelievers just as they would kill you all! Does this mean that Muslims should sit back until they are devoured by [the unbelievers]? Islam says: Kill them, put them to the sword and scatter [their armies]….Islam says: Whatever good there is exists thanks to the sword and in the shadow of the sword! People cannot be made obedient except with the sword! The sword is the key to Paradise, which can be opened only for the Holy Warriors! There are hundreds of other [Qur’anic] psalms and Hadiths [sayings of the Prophet] urging Muslims to value war and to fight. Does all this mean that Islam is a religion that prevents men from waging war? I spit upon those foolish souls who make such a claim.”

He's as nice as he is good lookin'!

There 'ya go... Straight from the horse's mouth.

Hey Brooke, Yep,,, This Robert Spencer book on Muhammed is quite illuminating. It sounds like M was quite the opportunist,,,, and 1.2 billion people actually believe all this BS... Heck, I KNOW people who believe it! .....that's just plain sociopathic.

Crazy Mo would just wake up one morning and decide it was a good day to go kill and steal, so off he'd set to murder and pillage...

I guess in a way I can identify with it, being ethnic Norwegian, but at least the Scandinavians never said 'God told us to do this"!!! And at least they realized after a while that it was a disgusting thing to do and STOPPED!!!

I swear, these people really don't know that it's wrong to kill a bus load of children. They think their god is pleased with that...

That Khomeini...he was always such a kidder...