It's a sad day in Texas 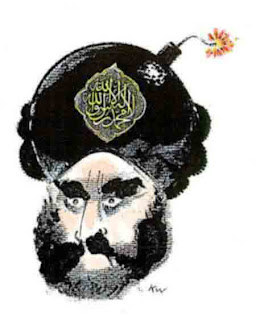 Hat tip: Jihad Watch
"Pro-Khomeini imam prays anti-Jewish, anti-Christian prayer in Texas Senate
An update on this story. Imam Yusuf Kavakci, like Husham Al-Husainy at the Democratic National Committee winter meeting in February, echoed the Fatiha, the most common prayer in Islam and the first sura of the Qur'an -- a prayer which has been traditionally understood as condemning Jews and Christians. And Kavakci followed its wording more closely than did al-Husainy, referring to it explicitly..."

You can give the guy who hatched this brilliant idea a piece of your mind here.

Why on earth are you having a radical muslim cleric pray in Texas State Senate? Haven't you read the koran? They want to kill us!!!! I can send you a list of the applicable verses if you're not informed and too lazy to read the entire text, which is no longer than the New Testament. And by the way, since you seem to know nothing about islam, the 'peaceful' verses were written early in Mohammed's career, when he and his gang were a minority. The radical verses followed when they became powerful. Please read up, and educate yourself for the good of Texas.
Posted by Eyes at 5:52 PM

An imam with ties to terrorism praying to Allah in the Texas legislature? In God's country?

my heart goes out to MOST of the fine people in texas, my favorite state so far.

o.t. party at curtains and longrange.

It's a sad situation, primarily because most people are too lazy to read a simple little book.... Imagine that. At least Mein Kampf was a lengthly tome, and thus had a tiny tiny excuse for their chosen ignorance.

Cool. I'll give it a read. I'm reading his book "The Truth about Mohammed":>D It's excellent!

Sure, the Islamist can pray for jihad in the Texas Senate with state endorsement... But let a Christian try to utter the words "Jesus Christ" in a prayer and it's ALL ABOUT the separation of church and state.