Body Parts At The Park 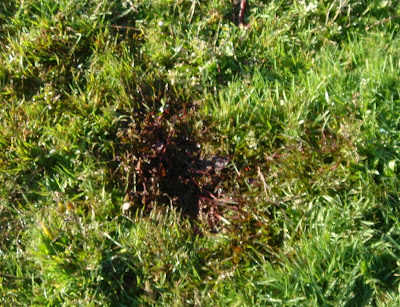 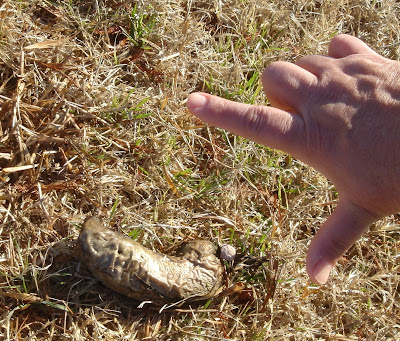 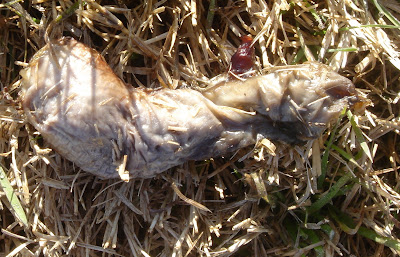 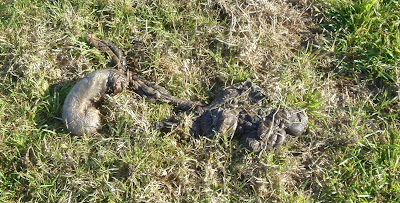 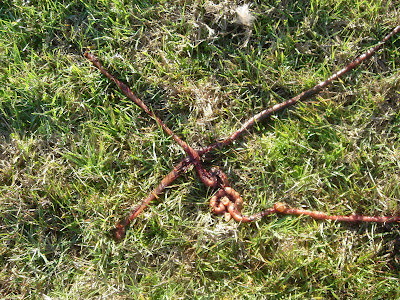 Intestines arranged in a cross pattern 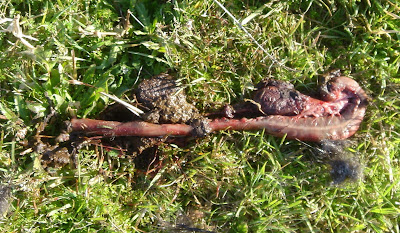 Intestines and stomach or scrotum? (click on to enlarge)

I know, I know... GROSS!!! Normally I have such nice pictures to post:>) I saw something really gross at the park one day about 2 weeks ago, but I couldn't tell what it was. I thought it looked like a big sausage, and some intestines, but didn't think much about it. Then, a week later I saw another such pile of what looked like intestines. Last night my girlfriend called me and said she had found a number of similar items at the park, so we decided to go investigate today and take pictures. These piles are in at least 5 locations, and vary in age from a day or two to several weeks old. The one shown is the most recent.
.
We called the parks department and they sent out a couple of guys to look at it. They were as baffled as we were, so he called for someone from the police department to come take a look. The police officer thought it looked like a coyote kill, but I don't think so. We determined (all 5 of us at this point), that each pile contains intestines and stomachs. No bones. Very little fur (just a few little tufts).
.
I think it's probably kids killing stray dogs and disemboweling them in some sort of satanic ritual. What do you think? I asked Mr Eyes, who used to trap coyotes and he said that there is no way a coyote would leave the intestines and stomach. That's their favorite part!!!

No way is it coyote kills. There would be other parts there, fur, and as Mr. Eyes said, they would've eaten all but the colon.

It'd be helpful if you had some other object to reference the size of this with...I mean, other than the dandylion.

That blood is really fresh...

I'd also like to know what's inside that stomach.

I think it's quite rare to have this sort of thing happen with actual satanists, but kids... could be a future serial killer in the making.

If this is a rather small animal's parts, you could be looking at a rather fat, sassy cat. I've seen one kill a rabbit in my 'hood and leave pretty much all of it intact. 'Outdoor' (don't get me started on that) cats are usually decently fed, and so they kill, but do not really eat the carcasses of what they take.

Five locations is a lot for a cat, though...

Man, I'd want to set up a hidden camera and see what comes by.

Nope, does not look like an animal's work! This may be a middle schooler, if so there is a future menace and mutilator in the area. I'd be concerned about outside pets. They usually start small and work their way up to larger and larger animals and then start on people. Usually children, small women, elderly, until they are caught, it may not be satanism(though he is definitely pushing it) but sadism, and a sociopathic or psychopathic personality.
Be very careful of yourself and your dogs! Until this sicko is caught!

Hi Brooke, Ya, there's no way it's a cat, unless it's a mountain lion. The 5th picture is the largest specimen. It is the size you would find in a really large dog or a human.

Hi tmw, I'm going to stay away from the park now. I saw 2 loose pit bulls there a couple weeks ago, and thought it might be a just an 'accident', but my girlfriend said she saw them again last Friday, loose and roaming the park. I don't think they did this though... they would kill, but not eat everything but the stomach and intestines.. IMHO.

Any chance these are just gut-piles left by a hunter.../ poacher?

FJ, I think you hit the nail on the head. Mr Eyes went down and took a look (ex-hunter/trapper) and said it looks to him like someone is hunting Nutrea. They eat Nutrea in some parts of the South, and that would explain why there's no bones. They gut it, take it home and fry it up! We saw a Nutrea in our neighborhood, which seems to indicate they're trying to find new homes. I'm pretty sure this is what's going on. I think the person probably owns the pit bulls too, since they showed up about the same time...

FJ, I think you hit the nail on the head. Mr Eyes went down and took a look (ex-hunter/trapper) and said it looks to him like someone is hunting Nutrea. They eat Nutrea in some parts of the South, and that would explain why there's no bones. They gut it, take it home and fry it up! We saw a Nutrea in our neighborhood, which seems to indicate they're trying to find new homes. I'm pretty sure this is what's going on. I think the person probably owns the pit bulls too, since they showed up about the same time...

This post is probably the one you asked for my opinion on, but I see from your most recent post that it's already been solved. Oh well... I didn't have a clue anyway! :)

Is that a beaver? I've never heard of nutrea before.

Hi Brooke, They are closely related to the beaver and are NOT native to the south. Someone had the bright idea to bring them down here and raise them for their pelts; however, they got loose and have spread like wildfire through the south. The burrow into the banks of canals and destroy them, so they're a real nuisance. At any rate, if that's what's going on (some guy's eating them), then all the more power to him! I wish he would gut them at home though.

The Nutria is related to the rat. I was thinking about hiring hundreds of hunters/trappers and selling the meat in China. Make nutria jerky by soaking the meat in a brine solution and using spices on them while drying the meat. The price of pork is going up in China so they may accept the nutria. The year of the rat could be used to invoke the sale of the meat and the fortune that would follow by eating the meat. Anyone could be very wealthy if they did it right. Maybe getting some healthy stock and raising them like hogs. The nutria can eat switch grass. :)