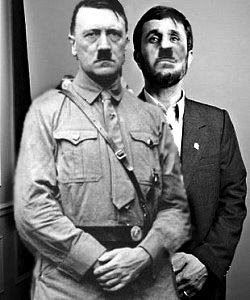 I got this from a comment section on another blog that was discussing the koran. They had an email address, but no blog address, or I'd give them hat tip:>)

"There is an old joke: a wife returns home suddenly to find her husband in bed with another woman. Unfazed, the husband looks up from the sheets at her and, with great indignation, demands: Who are you going to believe? Me, or your lying eyes?

It seems to me that right now almost the entire world is like that wife, looking down at that husband, who represents Islam. As we look around the world at the veritable orgy of violence directed at Infidels - from the killings of 200,000 Christians in East Timor, the murders of Christians in the Moluccas, the bomb in Bali directed mostly at Australian Christians, the attack on Filipino Christian peasants in the Philippines, the plots uncovered in Singapore, the Christians, Sikhs, and Hindus persecuted and often murdered by Muslims in Kashmir and Pakistan, the attacks on Jews all over the Muslim world, but especially in the Arab world, the attacks on non-Muslims, 800 of whom were held hostage in a Moscow theatre, the attacks in New York and Washington, that killed 3000, the plots uncovered in Spain, and Italy, and France, and Holland, and Norway, and Germany, and almost everywhere in the Infidel world - all tell us one thing. Yet, the world of organized Islam, including those we are repeatedly told are "moderate", keep telling us: Who are you going to believe? Us, or your lying eyes?"
Posted by Eyes at 1:07 PM

I'm of the opinion that it will take a direct revelation from God to wake people up, because the truth is ever-before them, yet they are still not understanding.

Hi RS, Yep. I don't think the jihadists are going to buy into the watered down version of Islam the mullahs are trying to sell the West.... They know their religion and they know that the latter verses of war from Mo in Medina abrogate the peaceful verses from Mo in Mecca. But, Mecca Mo is what the West has been sold, and they cling to it like a drowning man grasping a straw, in spite of all the obvious evidence.

Thanks P. I found it on a really interesting thread about the koran.. :<>

President Chirac keeps telling the French we have to avoid the clash of civilizations. I think he's right.

Hi M, I think it's most likely unavoidable. It's particularly unavoidable if we pretend that islam is something it is not. There are peaceful surahs in the koran, but they are abrogated by later surahs which are very violent.

When mohammed was in Mecca he was trying to "convince" people his new religion was peaceful and they should join him, hence the peaceful verses (surahs). When he went to Medina and subdued it by force, he then switched to the more violent form of "persuasion" which turned out to be very effective.

Also, the koran versions which are in English are watered down. It's no accident that the people who read the arabic version are behaving most violently. People need to know the truth and then base their decisions on that. It doesn't do any good to hide from the truth and pretend it's something it is not.

Ooh, that is very, very good.

I would be most interested in finding out just how much and where the Koran has been diluted...All part of the taqiyya, I suppose.

Hi Brooke, It's been watered down for us. For example, the version I have has says in Surah 4.34 that if a wife is rebellious, then the husband should verbally correct, then not sleep with her, and if all that fails, he should "punish them mildly". That SHOULD read "beat them". So, I've ordered a more correct version by Rodwell which also untangles the whole mess and puts the verses in chronological order.

As it stands in most korans, they run from longest chapter to shortest, rather than chronological. How stupid is that? The Rodwell version is only $5 on Amazon.com.

Hmm. CAIR offers a free Koran through thier site. I wonder which version one would get?

Hmmmmm, I wonder. I think it's the Yusif Ali version, which is pretty tame.