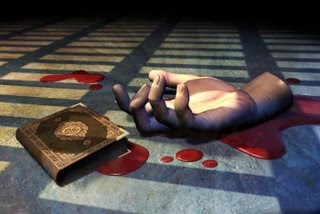 "NCRI - The chief of the regime’s judiciary in the western city of Kermanshah, Allah-Yar Malik-Shahi yesterday said, “Soon there will be a number of limb amputations in public in connection with robberies in [Kermanshah] Province.” (Official news agency IRNA, January 10, 2007)
He said, “The judiciary will cut off the hand which steals people’s properties in order to serve as a lesson for others… Carrying out several sentences in public will greatly decrease such crimes in society.”
.
The medieval regime has resorted to extreme measurers, such as limb amputation, eye gouging, flogging, and the degrading punishment of parading prisoners around towns, to combat the rising tide of popular uprisings and demonstrations in various provinces across Iran.
.
The Iranian Resistance calls on all international human rights organizations to condemn the medieval regime’s punishments and take urgent action to stop the barbaric and systematic violations of human rights in Iran.
.
Secretariat of the National Council of Resistance of IranJanuary 11, 2007 "
Posted by Eyes at 5:22 PM

They are such compassionate and understanding people, are they not? NOT!!! It's hard to believe these people are living in the twenty-first century, Eyes.

this would all be so different if these people were tried and convicted by a jury of their peers.

for instance - a few years ago here in arkansas, some juveniles in the area were caught vandalizing an historic country church - after a trial and conviction, it was decided they receive a public spanking - from what i understand, that's exactly what happened and they stayed out of trouble after that.

if i caught someone stealing from me, i would insist they pay dearly.

the lopping off of hands is drastic, but they would pay.

this is a very touchy issue with me - i know if one of our children were found to have been abused by ANYBODY, they would play hell trying to find the perp's remains.

and you know i do NOT sympathize with extremists and then blame it on G-d.

Nanc-I'd shoot anyone attempting to abuse one of mine! Then I'd petition the court to hang the remains in front of their house with a large sign explaining why they were dead!
There are 3 child molestors living within a 4 block area, and about 20 in my zip code! I worry about the 3 little boys next door, they are left unsupervised!
Good morning, G*D bless and Maranatha!

Hi Gayle, I an article somewhere by someone who went to Pakistan, perhaps a reporter, anyhow he said what really struck him was how many people there were with missing hands.... Can you imagine?

Hi Nanc and tmw, I agree. Child molestors should be executed. There is absolutely no hope for someone who would do something like that to a child.

I believe that if you end up in jail, you should be punished for your crime. But no-one, not even a convicted person, should suffer homosexual rape.

The problem is that too many people are being sent to jail for crimes that should be recompensed monetarily (like theft). Prison also holds people who have no chance of reform -- like rapists, child molesters, and murderers.

The state holds the power of the sword so as to preserver order. If it does not wield the sword, then there is no order. That's what we see today. In other words, "Justice delayed is justice denied!"

Hi RS, I have no mercy in my heart for child rapists.... for them to receive (an adult) what was done to a child, seems quite fair.

I don't care for equal retribution punishment, rather, I think that the death penalty should be expanded to include rapists, child molesters, ect., and greatly edit the laws that allow convicts to sit on death row for 30+ years.

We should dispose of those folks like the garbage they are.

There is a registered sex offender living a block away, within eye shot of my backyard! You'd better believe my Dane goes outside whenever my kids do!

Hi Brooke, and that is the problem... Without justice, people have to take the load of self-protection upon themselves. After my dog was killed by a stray, I started carrying mace...