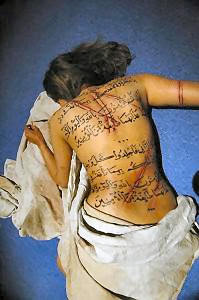 I found this survery at 'Muslims for a Safe America' It was taken at the Islamic Society of North America’s 43rd Annual Convention in Chicago from September 1, 2006 to September 4, 2006. The respondents were all American muslims. For the whole survey, go here.
.
Here's a sample, which pretty much sums up the level of 'deep shit' we're in:
.
15. Is it justifiable for the U.S. government to do any of the following in an attempt to prevent terrorist attacks in America:
.
a. taking religion and ethnicity into account as one factor when deciding whom to interview and search at airports?
YES 37
NO 258
UNDECIDED 12
.
b. monitoring activities at American mosques?
YES 43
NO 255
UNDECIDED 9
.
c. listening to phone calls of people in America whom the government claims are connected in some way with Al Qaeda?
YES 64
NO 232
UNDECIDED 11
.
d. having an informer pretend to support or encourage violence against America, to see if the targeted Muslims will decide to attack American targets?
YES 35
NO 258
UNDECIDED 14
.
e. monitoring Muslim charities in America, in the hopes of preventing funding for possible terrorist attacks?
YES 52
NO 242
UNDECIDED 13
.
f. focusing Immigration & Customs Enforcement resources on deporting Muslim illegal aliens, who have not been convicted of terrorism, in the hopes of disrupting possible Al Qaeda attacks?
YES 29
NO 263
UNDECIDED 15
.
g. allowing Muslim illegal aliens to stay in America if they agree to work as informants, monitoring the Muslim community for the government?
YES 21
NO 277
UNDECIDED 9
.
h. torturing suspected Al Qaeda members to get information about possible planned attacks
YES 14
NO 278
UNDECIDED 15
Posted by Eyes at 6:34 AM

I saw this survey shortly after it came out... Scary, scary stuff!

This is a closed community, with NO interest in intergrating.

I posted on this one as well, most respondents consider themselves Muslims fist, think that 9/11 is a conspiracy to make Muslims look bad, and think that the US is at war with Islam.

But they consider themselves good Americans. (eyes rolling)

Hi Brooke and Kevin, You guys are on the ball!!! I totally missed it.... you're right though, they have zero interest in being Americans. It lines up pretty well with the opinions of the muslims I know also.

It doesn't leave much room for interpretation does it?
The Muslims make it very clear where their loyalties lie and it isn't with the country they live in.
I would favor mass deportations of all illegal Muslims in this country and of any Muslim convicted of any felony.

Yes ac, Their book says to not be loyal to any non-islamic country, they repeated demonstrate that when they reach the critical 40% population level,,,, there is no mystery here. I am surprise they aren't practicing 'taqiya' or whatever it's called, aka lying to fool the majority. They must have trusted the results wouldn't be published... surprise surprise.