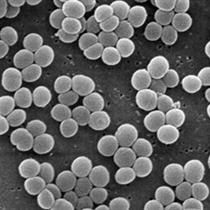 My mom sent this article this morning. Quite interesting...

A superbug that causes infections from large, boil-like lesions to hemorrhagic pneumonia and, in rare cases, flesh-eating disease is poised to "emerge in force" across Canada, a new report warns. While the prospect of a flu pandemic has governments scrambling to develop emergency plans, an epidemic of community-associated methicillin-resistant Staphylococcus aureus, or CA-MRSA, is raging in the U.S. and beginning to entrench itself here, infectious disease experts report today in the Canadian Medical Association Journal.

In the U.S., clusters have been reported in groups from NFL players to toddlers in day care.
In Canada, outbreaks have occurred in Alberta, B.C., Saskatchewan, Manitoba and Ontario. The Calgary Health Region sees between 40 and 70 cases per month. Infections are also being reported in Toronto, Montreal and Quebec City. Doctors are now investigating the possible transmission of the community-acquired staph strain among a small group of Calgary hospital patients, which would be one of the first cases of CA-MRSA being transmitted between hospital patients.

"Not a day goes by where I'm in clinic that I'm not pulling out a scalpel to drain one of these things," says Dr. John Conly, co-author of the report and an infectious disease specialist and professor of medicine at the University of Calgary.

"We're seeing far too many of them." The organism is an "old foe with new fangs," a pathogen that is virulent, drug-resistant and has an uncanny ability to "disseminate at large," according to the CMAJ report. So far, its prevalence is thought to be low, but rising in most parts of the country.

"Front-line physicians need to be aware of the increasing prevalence and the potential severity of CA-MRSA infection," the researchers write. The germ killed a healthy 30-year-old Calgary man and a three-month-old baby in Toronto in 2005. Both died of necrotizing pneumonia, or lung abscesses. The infection begins with what looks like a spider bite, a red, very tender area that rises up and comes to a head just like a small boil. If not treated promptly, the lesions can develop into large, spreading abscesses in the soft tissues that can grow to the size of a baseball "or even a grapefruit in some settings," Conly said in an interview. People develop fever and flu-like symptoms. In some cases, MRSA can cause bleeding in the lungs.

"For some reason, there are people who are predisposed to develop what looks like standard pneumonia and very quickly they begin to cough up blood," Conly said. Previously confined to hospital patients, the staph infection is now occurring in healthy people. The community strain "doesn't carry as much genetic baggage" as the hospital strain and is sensitive to other antibiotics, Conly says.

"But it seems to have a propensity to cause very large abscesses in the soft tissues with copious drainage, and seems to spread much more readily than the hospital strain has done."
It's also moving out of the traditional risk groups, such as intravenous drug users, the homeless, First Nations, the military and people infected with HIV.

The staph infection is spread by physical contact, through open cuts and scrapes, poor hygiene and sharing personal items, such as soap, towels, creams, razors and clothes.
Athletes are particularly prone: It has affected college and high-school-aged football players, wrestlers and rugby players. A Miami Dolphins football player lost a season because of a severe MRSA infection. The Canadian Committee on Antibiotic Resistance and the Coaching Association of Canada has launched a campaign to educate coaches, parents and athletes about staph infections.

Pets, too, can be reservoirs for infection. New Canadian guidelines to control MRSA recommend regular hand washing, covering any draining skin lesion and not sharing potentially contaminated personal articles. Doctors are urged to report suspected outbreak to public health authorities and to limit the use of antibiotics, because their over-use drives resistance.
The guidelines recommend alcohol-based hand sanitizers in sports facilities where there are no sinks, showering after every game or practice, avoiding sharing towels or equipment, cleaning equipment regularly, ideally after every use. Anyone with an open sore should avoid contact sports, and should stay away from common whirlpools or saunas. Children with open or infected sores should also be kept away from day care or school until they're treated.

I'm glad I live in the country and don't get out into crowds much!

this may seem gross, but i'm going to say it anyway - a few years ago, my father-in-law and i were discussing the fact that you NEVER see a kid with one of those big, thick, dark scabs on skinned knees or elbows - the kind we used to get in the sixties and before - you know the kind - about the thickness of two nickels and as big around.

we have made ourselves prone to infections by the amount of anti-biotics we've poured into ours and our childrens' systems for the last forty years. we are unable to heal ourselves by toughing many things out.

we'll see more of this as the years go by. no immunities to anything.

Nanc, that's a good point. I guess everyone goes to the doctor right away to get patched up. That is funny though.. I remember a scab or 2 like that! Now it seems like whenever I get even a paper cut it gets infected. I dribble peroxide over it and fix it up real quick, but still it is strange.

I had scars on my knees from all the scabs I had. I was a clumsy child!
I refuse to go to the doctor with everything anymore. I just up my antioxidents, take Airborne and rest. I get over things quickly, when I get them! I mean really, taking your child to the doctor for a cold? Stupid, antibiotics won't help a virus...
None of us get really sick, and we don't get infections either.
But it does sound rather Matthew 24ish to me!

It sounds similar to something I had when I had pneumonia. There weren't any skin lesions, but there was an abcess (sp?)... which was removed via "the knife". It was originally of the strep type, but then I got staph in the hospital and hence the abcess. Vancomycin finally started to knock it out... That and several surgeries, etc....

I haven't heard a word about this until now.
Thanks for the post...is there anyway we can export this to Iran?

I think there are way too many antibiotics in our systems. Remember when we did just fine without all the antibacterial soap?
We got dirty as kids and we survived!

Cube-Grubby! And proud of it! And I still can get dirty working in the yard, I'm not afraid of dirt and sweat, just makes a shower more of a pleasure!
The hyperclean houses that are being advocated are going to cause more problems, allergies and sickness. Not that I advocate filth, far from it, but ridiculous is ridiculous!
Good morning, G*D bless and Maranatha!

Oh ya, those anti-bacteria soaps probably aren't such a good idea aye? I carry "clean wipes" in my purse and use them before I eat (when I'm out)... I'm a bit of germ freak. Not quite as bad as Howard Hughes and all.... I saw the most disgusting thing at the park the other day...

...and if a kid did show up at a hospital with scraped knee's these days, I'm sure that Child Services would soon be paying his parents a visit...

Having worked in an ER, we saw MRSA in EVERY nursing home patient that came in!

You know why...? Hospitals/ homes aren't NEARLY as clean as you think they are! Our hospital had, for a 24/7 BUSY ER, one housekeeper for 8 hrs. a day who was ONLY ALLOWED by her department head to clean the waiting room! This was the source of much lamentation by the nursing staff, who often had no time to do idle cleaning between the enormous load of patient care.

"The budget doesn't allow for any more" was the line we always got...

Brooke! Okay that explains why I got Staph pneumonia when I was in the hospital for Strep pneumonia... Yee gads... It was a nightmare. I only pray I never end up there again. Actually it was ICU, not emerg.

As a pt., you have to be a real SOB about getting a housekeeper in your room every day.

I once found BLOOD on my bedrail when I was a patient once in the hospital. You can only imagine the royal fit I threw!

Hi Brooke, Yep the hospital is the worst place to be... What is the death rate in hospitals I wonder...