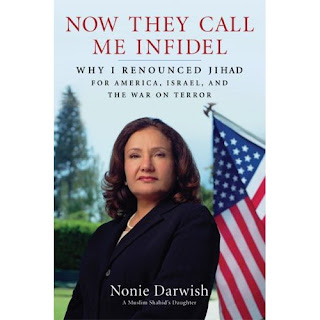 I'm about 1/2 way through this book, which was recommended by my mom. Hat tip MOM!

It's very interesting because she studied sociology, and hence looks at arab culture and problems from that perspective. Here's a little sample:

"The natural reaction for women to resolve this repression could be either to revolt or to end up becoming even more radical and religious than her male counterpart. Revolting is regarded as anti-Muslim and against Allah's commands, and that makes it out of the question for many Muslim women. For some, the solution ends up being, "If you can't beat them, join them." The only door left open for them to achieve power and respect is through compliance and becoming a part of the larger system that oppresses other women. To many the veil then becomes a woman's symbol of honor, power, and respect; her female form of jihad."

It explains why so man converts claim they feel "liberated" by the veil.

A "symbol of honor, power and respect." *sigh* It's truly sad when one thinks about it.

It explains a lot! Her book is very interesting from a sociological and psychological viewpoint. Their 'culture' is so opposite to ours,,,, In many ways they are more like liberals because they are so dogmatically attached to their ideas and seem to lack intellectual curiousity about opposing ideas.

Like leftistas, they are absolutely TERRIFIED of new or opposing ideas! Pride keeps them in chains because rethinking their belief system would "shame" them for being so wrong!
Pride was the first sin, it is also one that can keep someone chainned to sin, being wrong is worse...

Can we look forward to a review when you're done?

Hi tmw, That is much of it. They are a very 'class' based society. They get their 'value' from being above some poor other sucker. Islam feeds fuel to the fire.