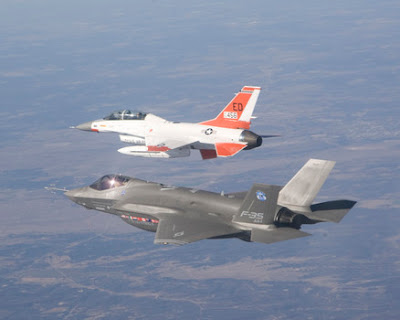 Meet the new F-35 Lightning II., By W. Thomas Smith Jr.
.
America’s brand-new F-35 Lightning II is currently undergoing a series of tests over Fort Worth, Texas. The third flight on Wednesday tested the aircraft at 23,000 feet, the highest altitude the aircraft has ever been. And this week, Lockheed Martin’s chief test pilot Jon Beesley — the only man on the planet to have flown the F-35 — plans to take the jet even higher.
.
The F-35 is not the first fighter ever tested by Beesley, a 56-year-old former Air Force officer and grandfather of six. He also is the second man in the world to fly the Air Force’s latest air supremacy fighter, the F-22 Raptor (designed to replace the F-15 Eagle). And he was one of the first to fly the now aging F-117 Nighthawk (the world’s “first operational stealth aircraft”).
.
Like the Raptor and the Nighthawk, the F-35 is a stealth fighter. But it is the first-ever aircraft designed to replace four existing aircraft from three services. In full production, it will replace currently operational fighters like the Air Force’s F-16 Fighting Falcon and the “tank killing” A-10 Thunderbolt, the Navy and Marine Corps’ F-18 Hornet, and the Marines’ AV-8 Harrier “jump jet.” On Wednesday afternoon, a few hours after testing the F-35, Beesley explained why the new nine-G, Mach 1.6 (just over 1,200 miles per hour) fighter is unlike anything ever flown.
read more....
Posted by Eyes at 8:32 AM

Isn't it amazing how graceful those big hunks of metal are?

I live next to an AF base, I'll be looking to see if any show up before we move!
I love to watch the planes...

Cool! Have you seen any of the stealth bombers? What kind of AFB is it? TAC, SAC, MAC?

Oh, she's a beauty. Those stealth bombers are awesome to see in the sky.

our cabin on the mountain is right in the path (70 miles or so) of whiteman afb where the b-2 was stationed during the war and it would fly late at night - never saw one, but you certainly knew when they were flying over at night!

my fave is the sr-71 - i have actual in-flight fueling photos.

Patrick AFB is now used for trainning parajumpers, they have warthogs, and during air shows we had a fly over by the first stealth fighter. It's pretty quiet, the U2 was a whisper when it passed over us. My Dad was stationed at Whiteman before he retired. So I remember the big boys! They were on 15 mins. standby at that time, so it was a background noise 24/7!
Toured the B-2 and the Blackbird.
Being AF was fun!
And they sure are purty. Did you know that the B-52's wings are so long and heavy that they drooped about 14' at the ends!

They are so huge you can't believe they actually fly!
The U-2's also have such long wings and only 1 wheel, so 2 airmen had to run out and grab them and use special poles to keep them upright!

What a crazy sight that must have been.

i have seen a u-2 crash from a couple of hundred yards away. like nothing i've ever seen before or since.

the pilot knew he was going to crash and tried to put it down in an empty field on his way to a municipal airport in our area - when he knew he wouldn't make it, tried to eject and his canopy failed to open upon ejection (which) probably killed him instantly - but eventually opened and ejected him, but the plane went down in a parking lot at our hometown newspaper office in california.

a very sad thing - but they say it is better to die in a u-2 crash than survive one and have to put up with all the b.s. the a.f. gives for crashing one. i don't know about that.

Nanc-You wouldn't believe how quiet they are! I was riding my bike and heard this strange, shhhhhshhhhshhh, above me, I looked up and it went right over my head! It was only about 40' above me! It came in a little low(yeah, a little) but made it safely.
Those things were so klutzy and kludged together it was amazing they did so well!
Good morning, G*D bless and Maranatha!

air shows are right up there in the ultimate of entertainment for me!

this plane is a beautiful work of art...got to see it back in December, and wow what a plane!