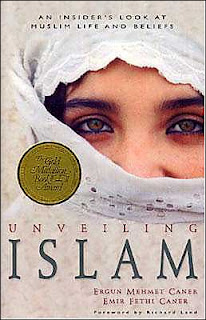 I'm reading "Unveiling Islam" by Ergun and Emir Caner, ex-muslims. It is written to try to help people understand islam, from a muslim point of view. Personally, I prefer the Walid Shoebat book, but this one is good too. Particularly good for liberals, who don't like to ruffle feathers. I thought this section was good on "The Sanctity of Religious Liberty":
.
"The Christian ideal is that the inerrant, infallible Word of God is the basis upon which ethical decisions are made. Christians are never to be reactionary, that is, simply acting out of an emotional response to another person's actions. Action based upon Scripture is an important precept of the Christian theory of religious liberty. Muslims and others have a God-given right to believe whatever they wish and to practice that belief so long as their actions do no violence to others. At the point of violence, Christians can in some circumstances step in to act, but not out of a desire for revenge. The motivation must be love and honor for the fundamental laws God has given to govern humanity....
.
Further, God the Father gives all people the opportunity to love Him by accepting the sacrifice of His Son on the cross as forgiveness for sin. Since love must be a choice and connot be forced upon anyone, God, in His power, allows people to reject Him, even allowing people to hate him.
.
Therefore, people must be given ample possibility to act in accordance with their decision for or against the Creator of the universe. To do otherwise is to indirectly or directly force a person into a legalistic relationship with the Church and its doctrines."
Posted by Eyes at 5:18 PM

let me say first, i lovvvvvvvvvve ergun caner - if my own husband were about 80-100 pounds heavier - he would be ergun - Lord forgive me, but when you created baldness, you captured my heart! it is my single-most physical downfall...honestly...why'd you have to go and do that?!?

not to mention he is one of the most spot-on christian men bouncing about the universe!

i have much to be thankful for...

That does it! I've seen this book mentioned three times this week alone; I just requested it from the library!

I think you captured you the essence of Western Civ in bold type.

tmw, Oh NO! You'll go bald instead of SILVER! Ya, I think we're in the same boat. I've decided to go blond instead:>) LOL!

Hi FJ, It does, doesn't it? And that's the reason to fight for freedom. 'Give me liberty or give me death'!

I got my first grey hair at 19! Runs in the family, mom did, too. Fortunately, we don't wrinkle too badly! I'm working on a faint streak on the right temple, and the hubby loves it... even though I'm only 27!

he has a full head of nearly black hair, blue eyes, and the only grey is in his beard... Grr... Gotta hand it to him, he's a looker.

I love black hair and blue eyes! Heck, I love blue eyes... It must be because my mom has blue eyes, and my grandparents. My dad had brown eyes and my sister and I both have green eyes.

Two out of three of our kids got their Daddy's blue eyes, including our son. Our youngest daughter wound up with a blue/brown hazel.

Your little girl is adorable... I remember a photo ~ year or so ago. I bet she's spoiled!

do ya'll have any idea what islam is or what you read in the book? or were you so infatuated wtih the man who wrote it that you didnt even stop to think about what you were reading. if i were to pick a fight with you about islam being right and you wrong would you be able to defend your beliefs>? dont be so ignorant. doesnt the bible say to always be ready with an answer to those who ask about what you believe? yeah, it also says to study and show thyself approved. you are so ignorant. what would you all do if america was over run by muslims>? you wouldnt be able to adapt would you?

yes i would love to debate with you.... i hope you know what you are doing because i was raised in a christian home and my family was close to several pastors from area churches.... i know the truth because i have studied for it. alhamdulillah. i hope that you gain knowledge and the truth from "debating" with me. forgive my first comment i didnt mean to seem snobby... it is just that religion and people's souls are a more important thing to get out of a book than how cute the bald author is. it infurriates me that you would think more about that topic than what the book was talking about. may He forgive you. please contact me on jassigirl17@gmail.com you can copy and paste these "debates" as you please and where you please, but i would like to debate there please.

Your blog keeps getting better and better! Your older articles are not as good as newer ones you have a lot more creativity and originality now. Keep it up!
And according to this article, I totally agree with your opinion, but only this time! :)

It is useful to try everything in practise anyway and I like that here it's always possible to find something new. :)